What is the station of ‘Abdu’l-Bahá? 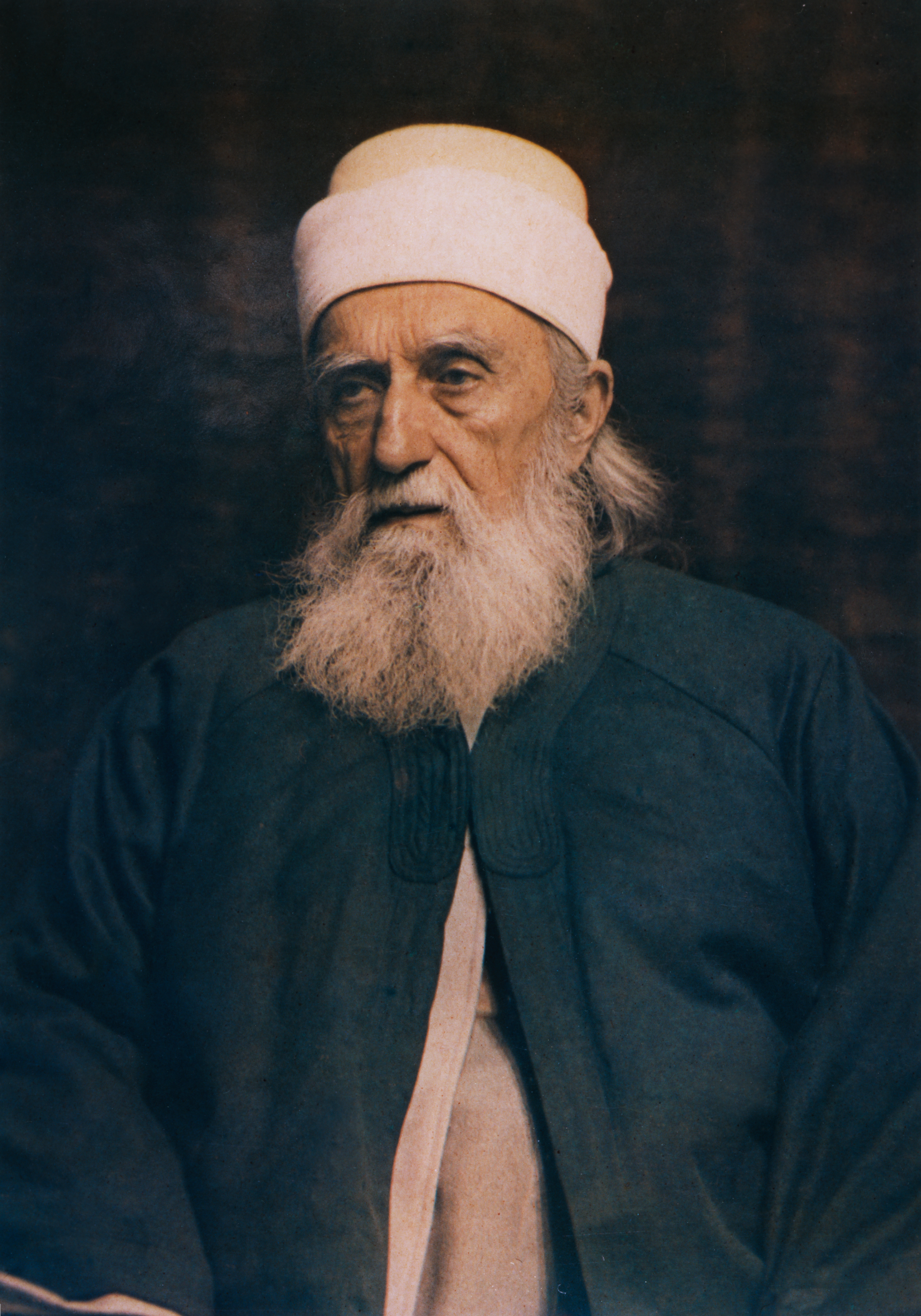 He is, and should for all time be regarded, first and foremost, as the Center and Pivot of Bahá’u'lláh’s peerless and all-enfolding Covenant, His most exalted handiwork, the stainless Mirror of His light, the perfect Exemplar of His teachings, the unerring Interpreter of His Word, the embodiment of every Bahá’í ideal, the incarnation of every Bahá’í virtue, the Most Mighty Branch sprung from the Ancient Root, the Limb of the Law of God, the Being “round Whom all names revolve,” the Mainspring of the Oneness of Humanity, the Ensign of the Most Great Peace, the Moon of the Central Orb of this most holy Dispensation — styles and titles that are implicit and find their truest, their highest and fairest expression in the magic name ‘Abdu’l-Bahá. He is, above and beyond these appellations, the “Mystery of God” — an expression by which Bahá’u'lláh Himself has chosen to designate Him, and which, while it does not by any means justify us to assign to Him the station of Prophethood, indicates how in the person of ‘Abdu’l-Bahá the incompatible characteristics of a human nature and superhuman knowledge and perfection have been blended and are completely harmonized.
Shoghi Effendi, The Dispensation of Bahá’u'lláh, paragraph 75

Though moving in a sphere of His own and holding a rank radically different from that of the Author and the Forerunner of the Bahá’í Revelation, He, by virtue of the station ordained for Him through the Covenant of Bahá’u'lláh, forms together with them what may be termed the Three Central Figures of a Faith that stands unapproached in the world’s spiritual history. He towers, in conjunction with them, above the destinies of this infant Faith of God from a level to which no individual or body ministering to its needs after Him, and for no less a period than a full thousand years, can ever hope to rise. To degrade His lofty rank by identifying His station with or by regarding it as roughly equivalent to, the position of those on whom the mantle of His authority has fallen would be an act of impiety as grave as the no less heretical belief that inclines to exalt Him to a state of absolute equality with either the central Figure or Forerunner of our Faith. For wide as is the gulf that separates ‘Abdu’l-Bahá from Him Who is the Source of an independent Revelation, it can never be regarded as commensurate with the greater distance that stands between Him Who is the Center of the Covenant and His ministers who are to carry on His work, whatever be their name, their rank, their functions or their future achievements. Let those who have known ‘Abdu’l-Bahá, who through their contact with His magnetic personality have come to cherish for Him so fervent an admiration, reflect, in the light of this statement, on the greatness of One Who is so far above Him in station.
Shoghi Effendi, The Dispensation of Bahá’u'lláh, paragraph 69

This video produced for the Bahá’í World Congress in 1992 focuses on Abdu’l-Baha’s visit to America, his proclamation of the Covenant of Bahá’u’lláh and designation of New York as the “City of the Covenant”

He it was Whose auspicious birth occurred on that never-to-be-forgotten night when the Báb laid bare the transcendental character of His Mission to His first disciple Mulla Husayn. He it was Who, as a mere child, seated on the lap of Tahirih, had registered the thrilling significance of the stirring challenge which that indomitable heroine had addressed to her fellow-disciple, the erudite and far-famed Vahid. He it was Whose tender soul had been seared with the ineffaceable vision of a Father, haggard, dishevelled, freighted with chains, on the occasion of a visit, as a boy of nine, to the Siyah-Chal of Tihran. Against Him, in His early childhood, whilst His Father lay a prisoner in that dungeon, had been directed the malice of a mob of street urchins who pelted Him with stones, vilified Him and overwhelmed Him with ridicule. His had been the lot to share with His Father, soon after His release from imprisonment, the rigors and miseries of a cruel banishment from His native land, and the trials which culminated in His enforced withdrawal to the mountains of Kurdistan. He it was Who, in His inconsolable grief at His separation from an adored Father, had confided to Nabil, as attested by him in his narrative, that He felt Himself to have grown old though still but a child of tender years. His had been the unique distinction of recognizing, while still in His childhood, the full glory of His Father’s as yet unrevealed station, a recognition which had impelled Him to throw Himself at His feet and to spontaneously implore the privilege of laying down His life for His sake…

On Him Bahá’u'lláh, as the scope and influence of His Mission extended, had been led to place an ever greater degree of reliance, by appointing Him, on numerous occasions, as His deputy, by enabling Him to plead His Cause before the public, by assigning Him the task of transcribing His Tablets, by allowing Him to assume the responsibility of shielding Him from His enemies, and by investing Him with the function of watching over and promoting the interests of His fellow-exiles and companions. He it was Who had been commissioned to undertake, as soon as circumstances might permit, the delicate and all-important task of purchasing the site that was to serve as the permanent resting-place of the Báb, of insuring the safe transfer of His remains to the Holy Land, and of erecting for Him a befitting sepulcher on Mt. Carmel. He it was Who had been chiefly instrumental in providing the necessary means for Bahá’u'lláh’s release from His nine-year confinement within the city walls of ‘Akká, and in enabling Him to enjoy, in the evening of His life, a measure of that peace and security from which He had so long been debarred. It was through His unremitting efforts that the illustrious Badi’ had been granted his memorable interviews with Bahá’u'lláh, that the hostility evinced by several governors of ‘Akká towards the exiled community had been transmuted into esteem and admiration, that the purchase of properties adjoining the Sea of Galilee and the River Jordan had been effected, and that the ablest and most valuable presentation of the early history of the Faith and of its tenets had been transmitted to posterity…

He alone had been accorded the privilege of being called “the Master,” an honor from which His Father had strictly excluded all His other sons. Upon Him that loving and unerring Father had chosen to confer the unique title of “Sirru’llah” (the Mystery of God), a designation so appropriate to One Who, though essentially human and holding a station radically and fundamentally different from that occupied by Bahá’u'lláh and His Forerunner, could still claim to be the perfect Exemplar of His Faith, to be endowed with super-human knowledge, and to be regarded as the stainless mirror reflecting His light…

And now to crown the inestimable honors, privileges and benefits showered upon Him, in ever increasing abundance, throughout the forty years of His Father’s ministry in Baghdad, in Adrianople and in ‘Akká, He had been elevated to the high office of Center of Bahá’u'lláh’s Covenant, and been made the successor of the Manifestation of God Himself — a position that was to empower Him to impart an extraordinary impetus to the international expansion of His Father’s Faith, to amplify its doctrine, to beat down every barrier that would obstruct its march, and to call into being, and delineate the features of, its Administrative Order, the Child of the Covenant, and the Harbinger of that World Order whose establishment must needs signalize the advent of the Golden Age of the Bahá’í Dispensation.
Shoghi Effendi, God Passes By, p. 240-243 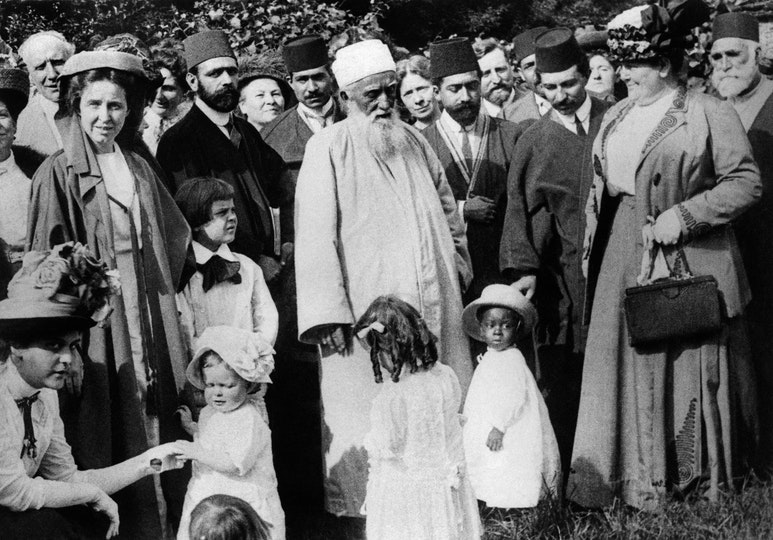 Here is a life, abundant, spacious, immeasurable. It cannot be adequately described. It cannot be encompassed. It lies beyond the range of assessment, because every event in the life of the Son of Bahá’u'lláh carries a major accent. He was eight years old when He was taken to the dungeon of Tihran and saw His beloved Father bent under the weight of chains. From that tender age to His seventy-seventh year when, His work done, He left His mortal frame, ‘Abdu’l-Bahá lived a life of total self-abnegation, of unbroken, unqualified service to God and to man. In this field He did not spare Himself toil or pain. Bahá’u'lláh had given Him these designations: ‘the Greatest Branch’, ‘the Mystery of God’, ‘the Master’. But once the mantle of authority came to rest on His shoulders, He chose to be known as ‘Abdu’l-Bahá — the Servant of Baha.

‘Abdu’l-Bahá sorrowed with the sorrowful and the stricken and the afflicted, in deep compassion. He rejoiced with the truly joyous. Thousands thronged to His door to seek relief. Some of them sought worldly goods. But many more desired the relief which only the goods of the spirit can bestow. To them all, ‘Abdu’l-Bahá gave freely and abundantly. No one found His door shut. No one was turned away. No one left His presence empty-handed. He did not merely wait for the oppressed and the bewildered and the fallen to come to Him. He went out to find them and to serve them. The learned and the wise also came to Him and drank deeply at the fount of His knowledge. Rulers and potentates, statesmen and generals, the mighty and the great came as well, and found in ‘Abdu’l-Bahá a counsellor whose motives were generous and disinterested.

It would be erroneous to imagine that by this description we have given a complete portrait of ‘Abdu’l-Bahá and have encompassed Him. What we have said of Him can be said of saints and seers of all ages. No description can measure up to the theme of a life which transcended every barrier to its total fulfilment. Once an observer remarked that ‘Abdu’l-Bahá walked ‘the mystic way with practical feet’. Dr T. K. Cheyne, the celebrated Biblical scholar and higher critic, spoke of Him as: ‘The Ambassador to Humanity’.
H.M. Balyuzi, Abdu’l-Baha - The Centre of the Covenant, p. 3-4

As to my station, it is that of the servant of Baha; Abdu’l-Bahá, the visible expression of servitude to the Threshold of the Abha Beauty.
Abdu’l-Baha, Selections from the Writings of Abdu’l-Baha, p. 56

At one time Haji Mirza Haydar-’Ali…wrote a letter to ‘Abdu’l-Bahá and asked Him to explain the significance of Bahá’u'lláh’s utterances…concerning the exalted station of the Branch. In reply, ‘Abdu’l-Bahá wrote a Tablet in which He announced most eloquently His station of servitude and besought the Almighty to immerse Him in the ocean of servitude. He then made the following statement:

“I am according to the explicit texts of the Kitáb-i-Aqdas and the Kitáb-i-’Ahd the manifest Interpreter of the Word of God… Whoso deviates from my interpretation is a victim of his own fancy… I affirm that the true meaning, the real significance, the innermost secret of these verses*, of these very words, is my own servitude to the sacred Threshold of the Abha Beauty, my complete self-effacement, my utter nothingness before Him. This is my resplendent crown, my most precious adorning. On this I pride myself in the kingdom of earth and heaven. Therein I glory among the company of the well-favoured!”
*Verses of the Suriy-i-Ghusn and the Mathnavi which glorify the station of ‘Abdu’l-Bahá.
Adib Taherzadeh, The Revelation of Bahá’u’lláh v 2, p. 394