Where does the Universal House of Justice derive its authority as head of the Baha’i Faith? 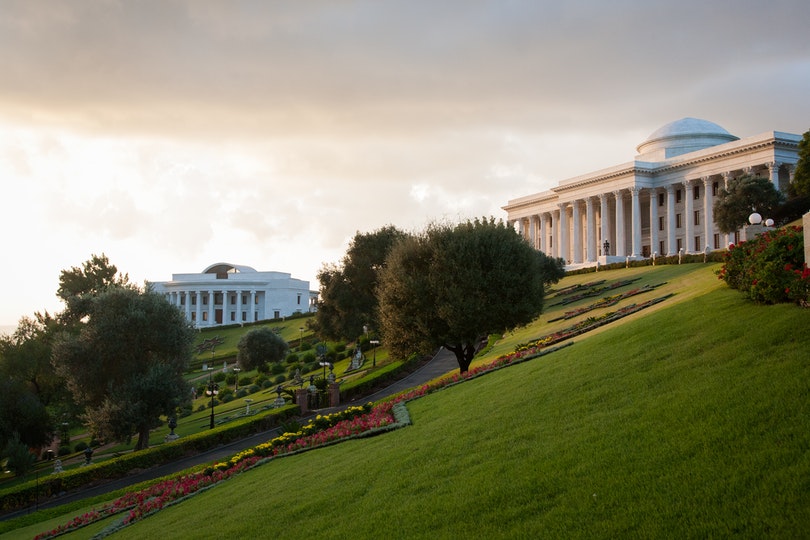 The men of God’s House of Justice have been charged with the affairs of the people. They, in truth, are the Trustees of God among His servants and the daysprings of authority in His countries.

O people of God! That which traineth the world is Justice, for it is upheld by two pillars, reward and punishment. These two pillars are the sources of life to the world. Inasmuch as for each day there is a new problem and for every problem an expedient solution, such affairs should be referred to the Ministers of the House of Justice that they may act according to the needs and requirements of the time. They that, for the sake of God, arise to serve His Cause, are the recipients of divine inspiration from the unseen Kingdom. It is incumbent upon all to be obedient unto them. All matters of State should be referred to the House of Justice, but acts of worship must be observed according to that which God hath revealed in His Book.
Bahá’u'lláh, Tablets of Bahá’u'lláh Revealed after the Kitáb-i-Aqdas, pp. 26-27

It is incumbent upon the Trustees of the House of Justice to take counsel together regarding those things which have not outwardly been revealed in the Book, and to enforce that which is agreeable to them. God will verily inspire them with whatsoever He willeth, and He, verily, is the Provider, the Omniscient.
Bahá’u'lláh, Tablets of Bahá’u'lláh Revealed after the Kitáb-i-Aqdas, p. 68

According to the fundamental laws which We have formerly revealed in the “Kitáb-i-Aqdas” and other Tablets, all affairs are committed to the care of just kings and presidents and of the Trustees of the House of Justice. Having pondered on that which We have enunciated, every man of equity and discernment will readily perceive, with his inner and outer eyes, the splendours of the day-star of justice which radiate therefrom.
Bahá’u'lláh, Tablets of Bahá’u'lláh Revealed after the Kitáb-i-Aqdas, p. 93 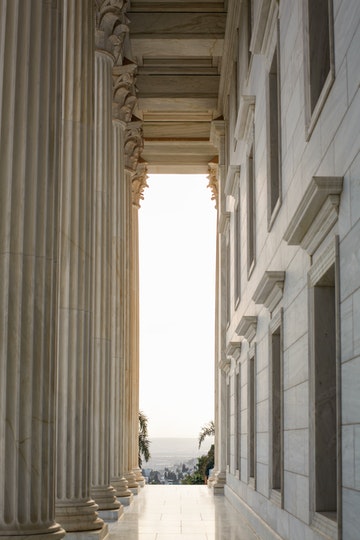 Columns of the Seat of the Universal House of Justice.
Photo credit: tamilajoon

The purpose of religion as revealed from the heaven of God’s holy Will is to establish unity and concord amongst the peoples of the world; make it not the cause of dissension and strife. The religion of God and His divine law are the most potent instruments and the surest of all means for the dawning of the light of unity amongst men. The progress of the world, the development of nations, the tranquillity of peoples, and the peace of all who dwell on earth are among the principles and ordinances of God. Religion bestoweth upon man the most precious of all gifts, offereth the cup of prosperity, imparteth eternal life, and showereth imperishable benefits upon mankind. It behoveth the chiefs and rulers of the world, and in particular the Trustees of God’s House of Justice, to endeavour to the utmost of their power to safeguard its position, promote its interests and exalt its station in the eyes of the world. In like manner it is incumbent upon them to enquire into the conditions of their subjects and to acquaint themselves with the affairs and activities of the divers communities in their dominions. We call upon the manifestations of the power of God — the sovereigns and rulers on earth — to bestir themselves and do all in their power that haply they may banish discord from this world and illumine it with the light of concord.
Bahá’u'lláh, Tablets of Bahá’u'lláh Revealed after the Kitáb-i-Aqdas, pp. 128-29

Unto the Most Holy Book every one must turn and all that is not expressly recorded therein must be referred to the Universal House of Justice. That which this body, whether unanimously or by a majority doth carry, that is verily the Truth and the Purpose of God Himself.
‘Abdu’l-Baha, The Will and Testament of ‘Abdu’l-Bahá, paragraph 36

Unto this body all things must be referred. It enacteth all ordinances and regulations that are not to be found in the explicit Holy Text. By this body all the difficult problems are to be resolved…
‘Abdu’l-Baha, The Will and Testament of ‘Abdu’l-Bahá, paragraph 25 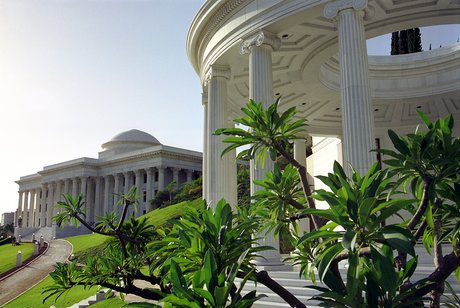 Seat of the Universal House of Justice. The Centre for the Study of the Texts is in the foreground.
Photo credit: Baha’i Media Bank

The sacred and youthful branch, the guardian of the Cause of God as well as the Universal House of Justice, to be universally elected and established, are both under the care and protection of the Abhá Beauty, under the shelter and unerring guidance of His Holiness, the Exalted One (may my life be offered up for them both). Whatsoever they decide is of God. Whoso obeyeth him not, neither obeyeth them, hath not obeyed God; whoso rebelleth against him and against them hath rebelled against God; whoso opposeth him hath opposed God; whoso contendeth with them hath contended with God; whoso disputeth with him hath disputed with God; whoso denieth him hath denied God; whoso disbelieveth in him hath disbelieved in God; whoso deviateth, separateth himself and turneth aside from him hath in truth deviated, separated himself and turned aside from God. May the wrath, the fierce indignation, the vengeance of God rest upon him!
‘Abdu’l-Baha, The Will and Testament of ‘Abdu’l-Bahá, paragraph 17

All must seek guidance and turn unto the Center of the Cause and the House of Justice. And he that turneth unto whatsoever else is indeed in grievous error. The Glory of Glories rest upon you!
‘Abdu’l-Baha, The Will and Testament of `Abdu’l-Bahá, paragraph 55

The Most Holy Book is the Book to which all peoples shall refer, and in it the Laws of God have been revealed. Laws not mentioned  in the Book should be referred to the decision of the Universal House of Justice. There will be no grounds for difference … Beware, beware lest anyone create a rift or stir up sedition. Should there be differences of opinion, the Supreme House of Justice would immediately resolve the problems. Whatever will be its decision, by majority vote, shall be the real truth, inasmuch as that House is under the protection, unerring guidance and care of the one true Lord. He shall guard it from error and will protect it under the wing of His sanctity and infallibility. He who opposes it is cast out and will eventually be of the defeated.
Abdu’l-Baha - cited in Messages of The Universal House of Justice, 1963 to 1986, p. 52 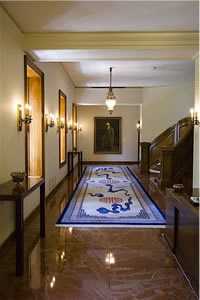 Entrance to the Council Chamber of the Universal House of Justice. A painting of ‘Abdu’l-Baha is at the end of the hall.
Photo credit: Mina Jam

Let it not be imagined that the House of Justice will take any decision according to its own concepts and opinions. God forbid! The Supreme House of Justice will take decisions and establish laws through the inspiration and confirmation of the Holy Spirit, because it is in the safekeeping and under the shelter and protection of the Ancient Beauty, and obedience to its decisions is a bounden and essential duty and an absolute obligation, and there is no escape for anyone.

Say, O people: Verily the Supreme House of Justice is under the wings of your Lord, the Compassionate, the All-Merciful, that is, under His protection, His care, and His shelter; for He has commanded the firm believers to obey that blessed, sanctified and all-subduing body, whose sovereignty is divinely ordained and of the Kingdom of Heaven and whose laws are inspired and spiritual.

Briefly, this is the wisdom of referring the laws of society to the House of Justice. In the religion of Islam, similarly, not every ordinance was explicitly revealed; nay not a tenth part of a tenth part was included in the Text; although all matters of major importance were specifically referred to, there were undoubtedly thousands of laws which were unspecified. These were devised by the divines of a later age according to the laws of Islamic jurisprudence, and individual divines made conflicting deductions from the original revealed ordinances. All these were enforced. Today this process of deduction is the right of the body of the House of Justice, and the deductions and conclusions of individual learned men have no authority, unless they are endorsed by the House of Justice. The difference is precisely this, that from the conclusions and endorsements of the body of the House of Justice whose members are elected by and known to the worldwide Bahá’í community, no differences will arise; whereas the conclusions of individual divines and scholars would definitely lead to differences, and result in schism, division, and dispersion. The oneness of the Word would be destroyed, the unity of the Faith would disappear, and the edifice of the Faith of God would be shaken.
Abdu’l-Baha - cited in Messages of The Universal House of Justice, 1963 to 1986, p. 85

The substance is, that prior to the completion of a thousand years, no individual may presume to breathe a word. All must consider themselves to be of the order of subjects, submissive and obedient to the commandments of God and the laws of the House of Justice. Should any deviate by so much as a needle’s point from the decrees of the Universal House of Justice, or falter in his compliance therewith, then is he of the outcast and rejected.‘
Abdu’l-Bahá, Selections from the Writings of `Abdu’l-Bahá, sec. 33, p. 68. 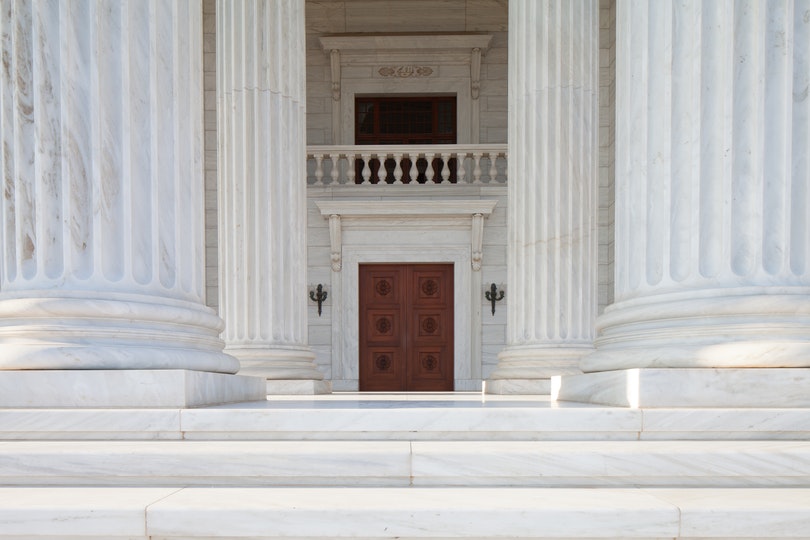 As to the order and the management of the spiritual affairs of the friends, that which is very important now is the consolidation of the Spiritual Assemblies in every centre, because on these fortified and unshakable foundations, God’s Supreme House of Justice shall be erected and firmly established in the days to come. When this most great edifice shall be reared on such an immovable foundation, God’s purpose, wisdom, universal truths, mysteries and realities of the Kingdom, which the mystic Revelation of Bahá’u'lláh has deposited within the Will and Testament of `Abdu’l-Bahá, shall gradually be revealed and made manifest.
From a letter written by Shoghi Effendi, 19 December 1923 cited in Messages of The Universal House of Justice, 1963 to 1986, p. 57

In a world writhing with pain and declining into chaos this community — the vanguard of the liberating forces of Bahá’u'lláh — succeeded in the years following `Abdu’l-Bahá’s passing in raising high above the institutions established by its sister communities in East and West what may well constitute the chief pillar of that future House — a House which posterity will regard as the last refuge of a tottering civilization.
Shoghi Effendi, The World Order of Bahá’u'lláh, p. 89

In His Will and Testament ‘Abdu’l-Bahá conferred the mantle of Guardian of the Cause and infallible Interpreter of its teachings upon His eldest grandson, Shoghi Effendi, and confirmed the authority and guarantee of divine guidance decreed by Bahá’u’lláh for the Universal House of Justice on all matters “which have not outwardly been revealed in the Book”. The Guardianship and the Universal House of Justice can thus be seen to be, in the words of Shoghi Effendi, the “Twin Successors” of Bahá’u’lláh and ‘Abdu’l-Bahá. They are the supreme institutions of the Administrative Order which was founded and anticipated in the Kitáb-i-Aqdas and elaborated by ‘Abdu’l-Bahá in His Will.
Universal House of Justice, The Kitab-i-Aqdas, p. 3